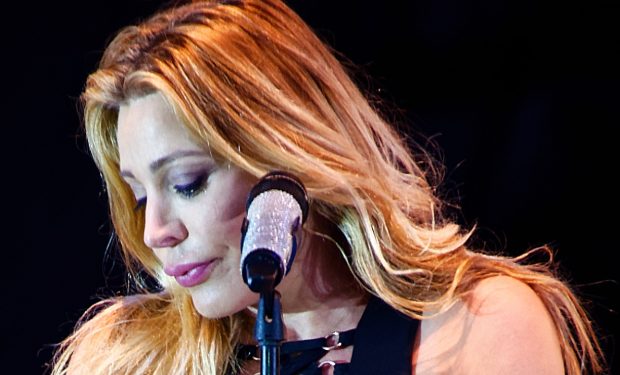 When three-time Grammy Award nominee Taylor Dayne was diagnosed with colon cancer, she says she didn’t tell her twins (they’re 20) at first. As heard in the interview below on the Tamron Hall Show, Dayne says it’s an emotional and physical journey. She’s using her platform to encourage others to get screened, especially after the sudden death of her friend, actress Kirstie Alley (Cheers, Look Who’s Talking), who died of colon cancer shortly after her diagnosis. Alley was 71.

Dayne was diagnosed with colon cancer after a routine colonoscopy earlier this year and “underwent surgery to remove 10 inches of her colon and was immediately declared cancer free.” People reports: “However, a post-op infection kept her in the hospital for about 20 days.”

The 60-year-old entertainer is now back on tour and right in time for the holidays. She’s shining bright in provocative ensembles as seen in the mesh bodysuits above and below. As one fan replied: “Holy smokes Taylor you are still the hottest and talented.”

Dayne recently showed her softer side in a purple tie-dye wrap dress, below, to announce her show at the Seminole Hard Rock Cafe.

Dayne is also celebrating the 35th anniversary of her hit song ‘Tell It To My Heart.’