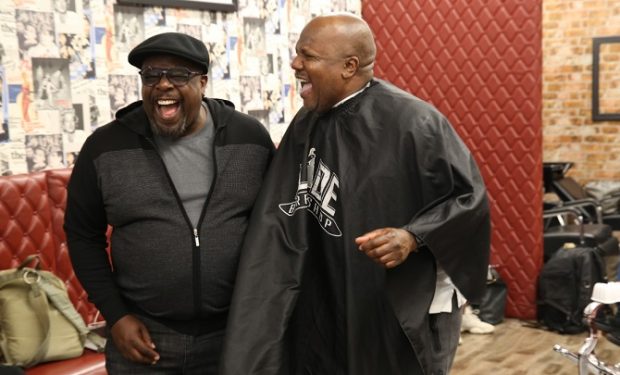 In The Neighborhood episode “Welcome to the Barbershop,” Dave (Max Greenfield) drops by Calvin’s (Cedric the Entertainer) longtime barbershop. Much to Calvin’s consternation, Dave is quickly embraced by its owner Que and the other patrons. Barber Que is portrayed by stand-up comedian Earthquake. (Fun fact: Cedric the Entertainer and Earthquake visited The Blade Barbershop in North Hollywood, California together. See photo below.)

[Check out Earthquake in Sharknado 4]

Earthquake, born Nathaniel Martin Stroman in Washington, D.C., is known for his roles in the films Armed with Mario van Peebles (Two Samiches), The Longshots (Karl), Clerks II (Husband), and Barnyard (the voice of Root the Rooster), among others. Earthquake is also recognized for his roles Sharknado 4: The 4th Awakens (Agent Cronenberg, SEE LINK ABOVE) and Everybody Hates Chris (Uncle Mike). Interesting fact: This Neighborhood episode is airing on Veterans Day: Stroman AKA Earthquake was in the US Air Force for 11 years; he refused to fight in the Gulf War and was honorably discharged as a conscientious objector. The Neighborhood airs Mondays at 8 pm on CBS, right before Happy Together.

To all of our armed service members, both retired and active duty: Thank you for your service, sacrifice, and total selflessness. I salute and honor you today and everyday 💪🏾 #VeterensDay2018 🛫🇺🇸