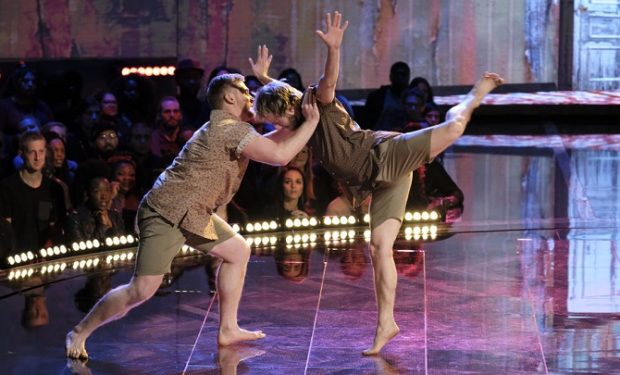 On Season 2 of World of Dance, judges Jennifer Lopez, Derek Hough and Ne-Yo watched the duo MarInspired perform. It was the first time two male contemporary dancers were featured dancing together on the show. JLo was so impressed with the storytelling performance (set to Julia Michaels’ “Issues”), she gave MarInspired a high score of 96. MarInspired chose the Harry Styles song “Sign of the Times” for their Duel against the animation trio from Atlanta, Dragon House.

[‘Sign of the Times’ is on Harry Styles’ debut solo album]

MarInspired is Wyatt Rocker and Charles Fournier. Rocker is the smaller dancer. He recently finished his tour with Sia and former Dance Moms dancer Maddie Ziegler. Check out the awesome photos below. World of Dance has moved to its new day and time – Wednesdays at 8pm on NBC.

I had such a blast performing on Good Morning America this morning! Thanks to everyone in #TeamSia for just being total badasses. What a life I’m living! #SiaonGMA

Woah, this was our first ever live performance with the boss at south by Southwest. What a life I am living. I can not wait to travel the world with #teamsia and show everybody our moves with her voice. Forever grateful for this experience. Life is cool.