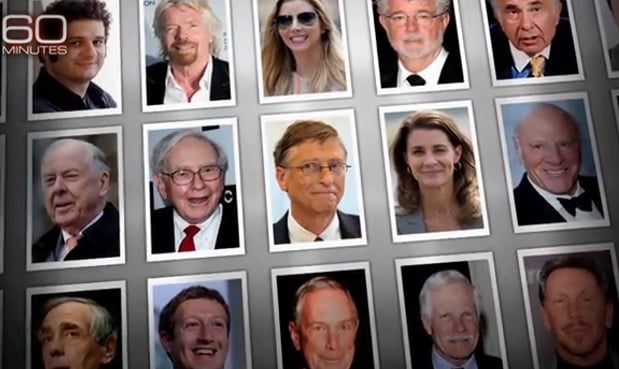 There are several members of The Giving Pledge, a group that requires one to be worth at least a billion dollars and — naturally — be willing to give half of that money away to charity. Members include founders Warren Buffett and Bill and Melinda Gates, Ted Turner, Michael Bloomberg, George Lucas, and Facebook CEO Mark Zuckerberg, among several others. These billionaires realize that government can no longer solve the great problems of the day and that their money and influence can help to solve some of them.

News of the generosity has brought out the best and worst in some people. There are several scams on the Internet claiming to be from or associated with the Giving Pledge. There is a warning on the organization’s website: “The Giving Pledge makes every effort to stop such scams, but unfortunately, we cannot stop them all. The Giving Pledge does not solicit donations or request any type of administrative or handling charges.” Charlie Rose interviews a handful of the billionaire philanthropists on 60 Minutes which airs Sundays at 7pm on CBS.