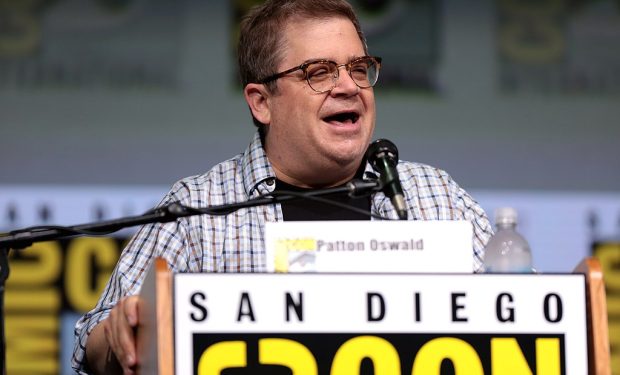 Comedy legend Jerry Seinfeld is doing a little work to promote his new Comedians in Cars Getting Coffee book, and just this week the “Show About Nothing” sage reiterated a truism about the essence of comedians.

What matters most to a comedian? Seinfeld was crystal clear: “A true comic really doesn’t care about anything else but getting the laugh. Everything else in human life feels artificial and pointless.”

Among the things in “human life” are awards, including famous and fancy ones like Grammy Awards. But — as Seinfeld attests — they pale in comparison to winning the joke. And so it follows that a true comic nominated for an Grammy will take the opportunity to try to get a laugh out of it.

Enter true comics Patton Oswalt and Jim Gaffigan, both Grammy-nominated and ready to feud over the prize — if said feud will elicit laughter. Mission accomplished.

This #grammy Best Comedy Album runoff is the most important election for a comedy category in a music awards show in history! Anti-ocean @pattonoswalt is too anti-ocean for the Grammys. https://t.co/FSnbLQAlwU pic.twitter.com/GHxsvj3v2c

Bet you didn’t know Oswalt was “anti-ocean,” despite his claims otherwise. It’s a conspiracy theory Gaffigan floats — and, well, conspiracy theories have been doing well of late.

Gaffigan decries: “Anti-ocean @pattonoswalt is too anti-ocean for the Grammys.” (Note: always repeat the characterization when trying to incite conspiracy.)

Still, with Gaffigan accusing Oswalt’s father (Lee Harvey Oswald) of having “killed JFK and JFK Jr,” the Oswalt-Gaffigan Grammys feud is sure to get hotter and hotter. Gaffigan really throws the ultimate hammer though, with his claim that “I support the ocean more than him.”

A bold assertion after Oswalt’s environmental shot across the bow, seen below. Anti-ocean? That Jerry Seinfeld sure knows what he’s talking about.

I need your support in this #Grammy runoff election. My opponents have all stated their commitment to blowing up the ocean. Call me crazy, but I think the ocean is important. Please vote. #ForTheFish pic.twitter.com/dae738v2Ev