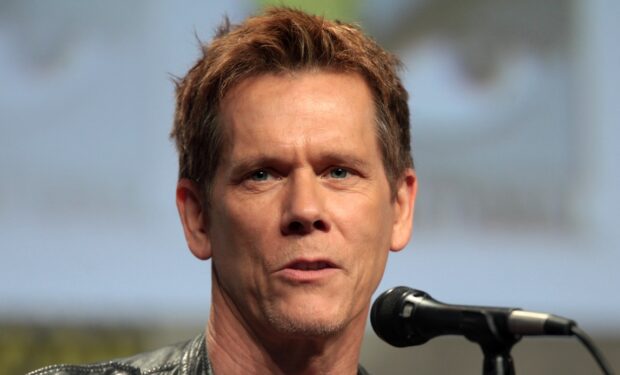 Hollywood movie star Kevin Bacon (Mystic River, A Few Good Men, Footloose) stars in the new slasher movie, They/Them. It’s about a group of LGBTQ teens who are targeted by a serial killer while attending a gay conversion camp. Guess who plays the charismatic camp director?

As seen in the trailer above, his character Owen Whistler welcomes the campers to Whistler Camp by saying, “This is a safe space for everyone.” But it’s not!

On his way to the They/Them movie premiere, Bacon (as seen in purple socks above) was photographed by his wife, actress Kyra Sedgwick (The Closer) who wrote: “I get to be with this guy” at the premiere.

Bacon and Sedgwick recently tried to reenact a scene from his famous movie Footloose, see below, and it’s adorable.

While promoting They/Them, Bacon told Yahoo about his real-life parenting experience with Sedgwick: “With our kids, we really tried our best to say, ‘OK, you can do your own thing and figure it out,'” he added, “That’s worked out for our kids, but it’s tough.”

Above is a photo of daughter Sosie Bacon and son Travis Bacon.