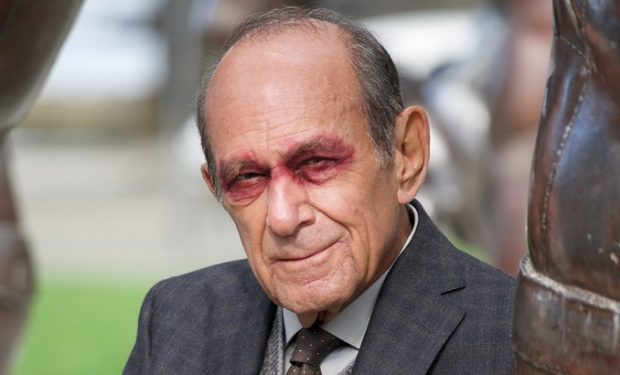 In The X-Files episode “The Lost Art of Forehead Sweat,” Mulder (David Duchovny) and Scully (Gillian Anderson) explore the idea of The Mandela Effect. It’s when a large group of people share false memories of past events. In psychiatry, it’s referred to as confabulation. While trying to figure out the truth, Mulder and Scully meet nefarious Dr. They who tells Mulder, “You’re dead.” His bruised eyes makes you think he’s telling Mulder the truth.

Dr. They is portrayed by Stuart Margolin. The two-time Emmy Award-winning actor is known for his roles on The Rockford Files (James Garner’s former cell-mate Angel), and in films including Death Wish with Charles Bronson (Aimes Jainchill) and Arbitrage with Richard Gere (Syd Felder), among many others. Margolin was also nominated for Outstanding Directing in a Variety or Music Program for The Tracey Ullman Show. The X-Files airs Wednesdays at 8pm on FOX, right before 9-1-1.