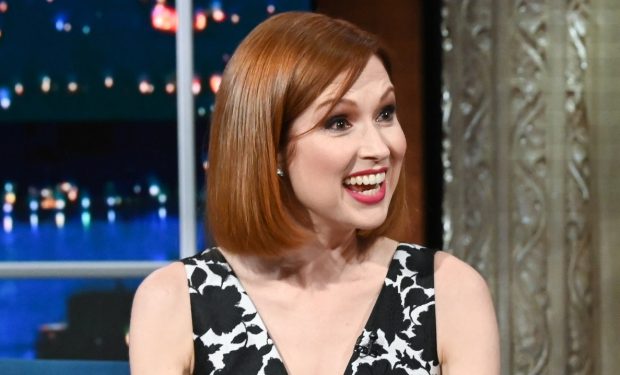 Comedic actress Ellie Kemper is best known for her popular TV characters Ellen on The Office (2009-2013) and Kimmy Schmidt in Unbreakable Kimmy Schmidt (2015-2020) and in movies including the 2011 blockbuster Bridesmaids (Becca), among others.

When she shared the photo above, she wrote: “Well well what we have here? A merry group of new best friends casually exchanging recipes of poppy seed strudel and lemon macaron?!“

While appearing on daytime talk shows, Kemper is turning heads in gorgeous and glamourous ensembles including the royal blue looks above and below.

In the “pull up a chair” photo series above, Kemper is wearing the “Melrose Dress” by Shoshanna, which is described by the designer as a “gorgeous chiffon midi dress” with a front button keyhole opening, balloon sleeves, and “a beautiful waist detail with a cascading front drape.”

When she spoke at the 92nd Y in New York City with Bridesmaids director Paul Feig (above), Kemper rocked another gorgeous royal/navy blue ensemble — an elegant wide legged sleeveless jumpsuit.