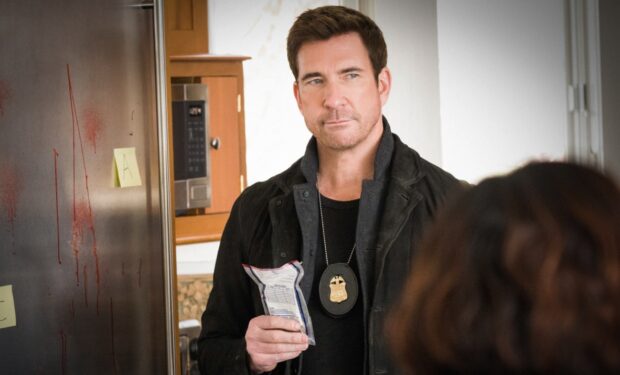 On the FBI Most Wanted episode ‘Left of Boom,’ the Fly Team lands in hot water when Vo is found at the scene where a Hungarian gambling regulator was murdered. Golden Globe winner and two-time Emmy nominated actor Dylan McDermott is making his debut as the team’s new boss, Supervisory Special Agent Remy Scott.

The FBI boss role is a switch for McDermott who most recently played the bad guy (Richard Wheatley) on the new series Law & Order: Organized Crime opposite Christopher Meloni.

The photos above, of McDermott playing chess and smiling while leaning against a bar in a long black leather trench coat, are from a feature article in The New York Times titled: Dylan McDermott Wants to be a Good Guy for a Change.

His fans are happy no matter the role. One replied: “You are a great bad guy and a great good guy!! Just a great actor all around,” and another wrote: “”There is no one hotter or being a bad guy.” And another wrote: “My gosh, you are smiling… how nice to see!” While others just like looking at him: “The most photogenic man there is.”

McDermott is also known for his TV roles as attorney Bobby Donnell on The Practice and American Horror Story (Dr. Ben Harmon), among others. More recently, he played a gas station pimp on Netflix’s Hollywood. See below.

FBI airs Tuesdays at 8 pm on CBS, right before FBI International at 9 pm and FBI Most Wanted at 10 pm.