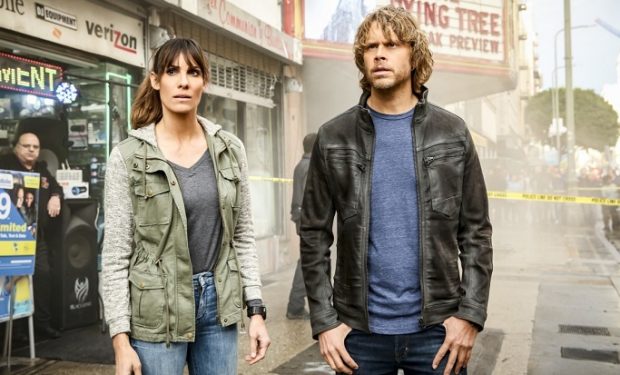 The CBS series NCIS: Los Angeles is already midway through its 10th season, proving they still have what it takes to engage fans. In the two part cliffhanger episode “Smokescreen,” Callen (Chris O’Donnell), Sam (LL Cool J) and the team partner with the FBI to locate a terrorist cell in Los Angeles believed to be prepping for an imminent attack. During the investigation, Blye (Daniela Ruah) and Marty (Eric Christian Olsen) talk to Janet, a scared homeless witness who eventually gives them a key piece of evidence.

Scared homeless Janet is portrayed by Délé Ogundiran. Audiences will recognize Délé from her recurring role as the brassy but endearing addict Lasandra Washington on Showtime’s Ray Donovan. She appeared on a slew of other TV shows, including Wisdom of the Crowd, Anger Management, Brothers & Sisters, Children’s Hospital and recurring on ABC’s Ugly Betty. Most recently, Délé hit the big screen at the 2019 Sundance Film Festival as an imprisoned immigrant being held without trial in the indie feature The Infiltrators. Fun Fact: Dele isn’t serious all the time – she made her stand-up comedy debut at the famous Ice House Comedy Club in late 2018.