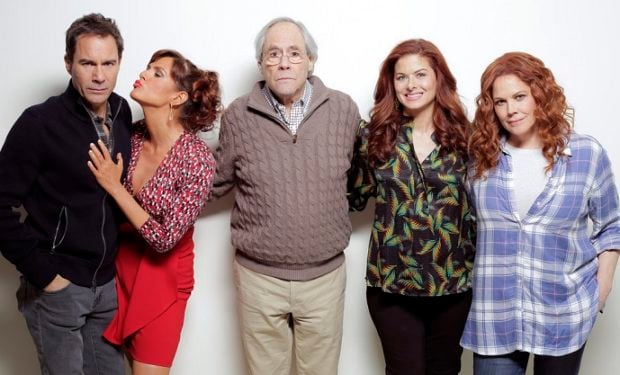 In the Will & Grace episode “One Job,” Grace (Debra Messing) takes Will (Eric McCormack) to her family’s home to honor her late mother’s birthday. (The late Debbie Reynolds played Grace’s theatrical mother.) They visit with Grace’s father Martin (Robert Klein), her sexy little sister Joyce (Sara Rue) who has the hots for Will, and Grace’s “screwed up” sister Janet. Janet used to live in a van and sell jewelry. (Janet used to call Grace “Smudge” or “Smudgie” although we never knew why.)

In years past, Janet was portrayed by Geena Davis. She appeared in just one episode in 2004 “The Accidental Tsuris,” a reference to the film that earned Davis an Academy Award in 1998. This time around, Mary McCormack takes on the character with aplomb. The Trinity College graduate is known for her role son Falling Walling (Taylor Bennett), Angie Tribeca (Liukin), House of Lies (Denna Altshuler), In Plain Sight (U.S. Marshal Mary Shannon), The West Wing (Kate Harper), ER (Debbie) and Murder One (Justine Appleton), among others. Will & Grace airs Thursdays at 9pm on NBC.