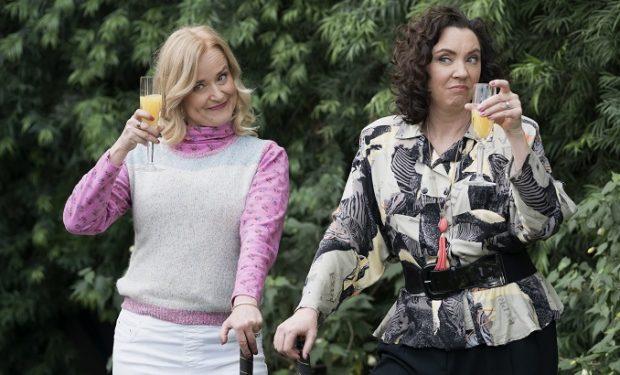 In The Goldbergs episode “Colors,” Barry (Troy Gentile) tries to help break up the fun being had by his mother and her friends in the backyard. They’ve laid out an amazing spread of pastries and cookies and mimosas. But Barry soon regrets his plan to get all of Bev’s (Wendi McLendon-Covey) attention. Bev gets into a big fight with her golden girl friends Virgina Kremp (Jennifer Irwin) and Essie Karp.

Essie is portrayed by Stephanie Courtney. The stand-up comedian is one of the main company members of The Groundlings Theater in Los Angeles. On camera, she’s known for her role as Marge on Mad Men (Marge, 2007), and as spokesperson Flo for Progressive Insurance. The Goldbergs airs Wednesdays at 8pm on CBS, right before the new sitcom Alex, Inc.