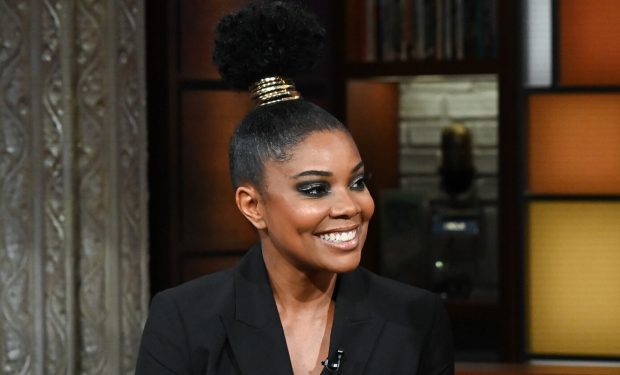 As seen in the photos below, Union-Wade stunned in a purple print maxi dress with side cut-outs and a black braid halter tie. She wrote to her husband of eight years: “Any chance to celebrate you, know that I’ll be the loudest one cheering!”

Fans and famous friends are going wild over the pics and the love evident between the two. Oscar-winner Octavia Spencer dropped a series of red-heart emojis, and GMA3 TV host Rocsi Diaz (who was one of the special guests at the party) replied: “great job on a beautiful night Gab.”

Swipe the photos above until you see a video. That’s Avery Wilson singing.

Wilson is known for competing on Season 3 of The Voice in 2012. See his audition video above. All four judges — Adam Levine, Christina Aguilera, Blake Shelton and CeeLo Green — turned their chairs. Spoiler alert, kind of: Wilson picked Green.

When Wilson (far left in the photo above with R&B star Chris Brown) saw Union-Wade’s post, he replied: “The night was MAJOR.”