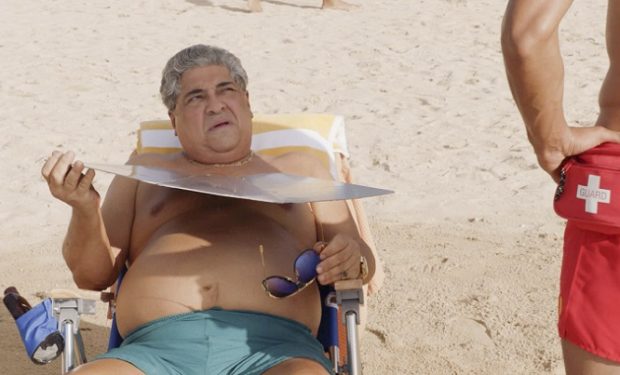 In the Hawaii Five-0 episode “He pūkoʻa kani ʻāina” or “A Coral Reef Strengthens Out into Land,” a private eye shows up dead. What’s strange is that he was killed the same way his client was killed. When not investigating the murder, McGarrett (Alex O’Loughlin) and Danny (Scott Caan) spend their free time trying to get their restaurant up and running. Danny’s Uncle Vito shows up to help.

[Check out Pastore in Riding in Cars with Boys]

Uncle Vito is portrayed by Vincent Pastore. He’s best known for his role as Salvatore “Big Pussy” Bonpensiero on The Sopranos (1999-2007). Pastore is also known for his roles in the films Shark Tale (the voice of Luca), and Riding in Cars with Boys (Uncle Lou), among others. Fun fact: In 2011, Pastore made an appearance on Shark Tank and pitched The Broccoli Wad, a rubber band that holds big wads of cash. On the show, he made a deal with fellow New Yorker Barbara Corcoran. Hawaii Five-0 airs Fridays at 9pm on CBS, right after MacGyver, and right before Blue Bloods.

2 more shows with Vincent Pastore from The Sopranos tonight. 7:30 and 10pm. Get your tickets at https://t.co/862otT0A9y pic.twitter.com/0lKL9rKG2s