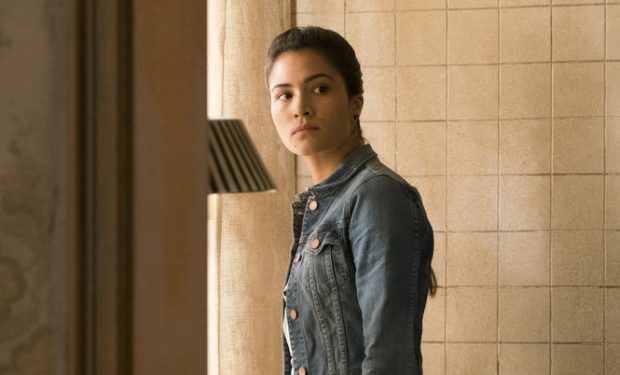 In the Blindspot episode “Two Legendary Chums,” Weller (Sullivan Stapleton) reunites with his former FBI partner Don Shipley (guest star Darren Goldstein). While they work undercover together, Zapata (Audrey Esparza) interrogates Jane’s teenage daughter Avery (Kristina Reyes). Zapata says they have to question everything she’s told them and suggests giving her a polygraph before they use the intel she’s provided. Weller thinks it’s a bad idea, “She’s not a criminal mastermind,” he argues. But Jane says a polygraph is a good idea. (P.S. Jane still doesn’t trust Weller.)

[Check out Reyes on Shades of Blue]

The young actress portraying Avery is Kristina Reyes. The native New Yorker launched her acting career in 2009 on the Nickelodeon series The Naked Brothers Band (bass player Kristina). Since then Reyes has appeared on episodes of The Blacklist, The Michael J. Fox Show, and The Following. In 2017, Reyes landed a recurring role as Monica on Shades of Blue with Jennifer Lopez (that other girl from the Bronx). Blindspot airs Fridays at 8pm on NBC.

Late night shootin’ with the one and only @jlo…couldn’t be more blessed. Thanks for having me @nbcshadesofblue ?