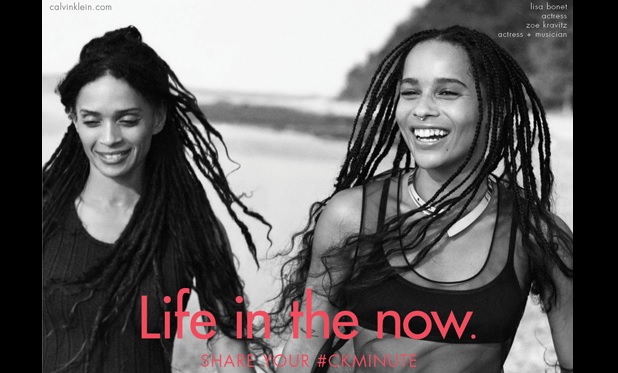 Former actress Lisa Bonet (The Cosby Show) and her 27-year-old model daughter Zoe Kravitz (daughter of rock star Lenny Kravitz) are featured in the 2016 Calvin Klein “Watches + Jewelry” spring campaign titled “Life in the Now.” The black-and-white photo (above) captures the two women holding hands on a beach. While many people are reacting on social media and commenting on how the two women could pass as sisters, Lisa Bonet is 48-years-old. Many of Bonet’s fans like Lola say: “Lisa Bonet is a beautiful woman and does not need to be told she looks ‘young’ she will become even more beautiful as she ages no doubt.”

Other celebrities featured in the “Life in the Now” campaign are not yet in their forties. They include actor Will Peltz, 29, and his model girlfriend Kenya Kinski, model couple John Ehin and Tilda Lindstam, model/actor Kim Woo Bin, 26, and his friend, model Xiao Wen Ju. The photographer is 41-year-old Cass Bird.