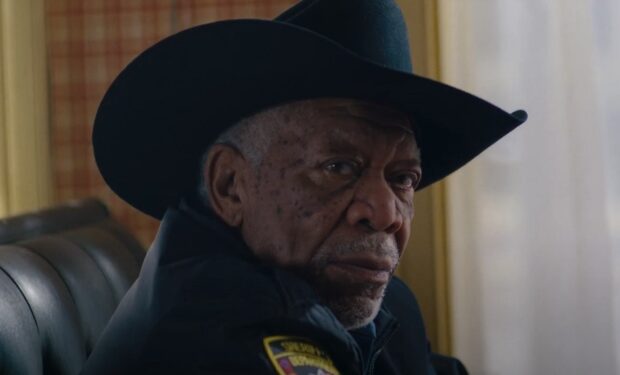 Morgan Freeman in The Minute You Wake Up Dead (Lionsgate)

Academy Award winner Morgan Freeman (Million Dollar Baby, Driving Miss Daisy, The Shawshank Redemption) has made more than 100 movies. In his latest film, ‘The Minute You Wake Up Dead,’ the 85-year-old Hollywood star plays Thurmond Fowler, the sheriff of a small town in Mississippi. Fun fact: Freeman was raised in the Magnolia State.

As seen in the trailer above, a stockbroker (Cole Hauser, who plays ranch hand Rip Wheeler on the Yellowstone Dutton Ranch with Kevin Costner — see below) gets involved in an insurance scam with a next-door neighbor (Jaimie Alexander, Blindspot) which leads to multiple murders.

The Minute You Wake Up Dead, which is directed and co-written by Michael Mailer (son of the late writer Norman Mailer), will be released in theaters on Friday, November 4, 2022.