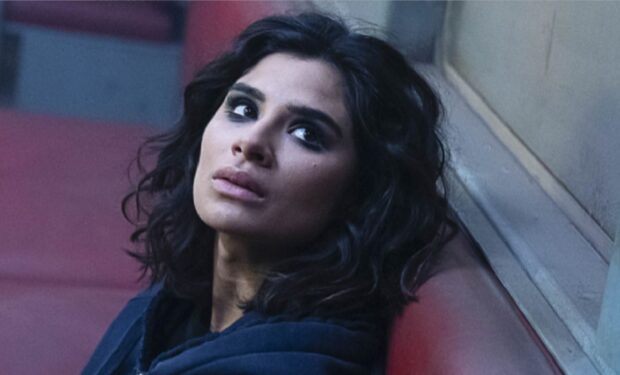 Actress Diane Guerrero is known for her roles as Crazy Jane in the DC Comics series Doom Patrol, Lina on Jane the Virgin, and Martiza on Orange Is the New Black, among others. Get ready to see (um, hear) more of the gorgeous and talented brunette in the upcoming animated movie Encanto. Watch trailer below!

Brooklyn Nine-Nine star Stephanie Beatriz voices the protagonist Mirabel Madrigal, a young Colombian girl who’s frustrated that she doesn’t have magical powers like the rest of her family including her older “perfect” sister Isabela (Diane Guerrero), who can make flowers grow anywhere, anytime. Fun facts: Mirabel is the first Disney “princess” to wear glasses, and Hamilton Broadway superstar Lin-Manuel Miranda is behind those original songs.

When not on a movie set or in the studio, the gorgeous and talented actress Diane Guerrero is walking the red carpet as seen in the stunning Aliette thigh-high slit gown above and below.

Taken at the premiere of Aretha starring Oscar winner Jennifer Hudson as the late great Queen of Soul, Aretha Franklin. More than one fan complimented Diane on her shapely legs. One wrote: “That quad game is STRONG!” and “You are so fit!”

She also looks great in a bikini!

Get ready to see more of Diane: she will play the young widow Maria Elena Holly in the upcoming movie Clear Lake about rock-and-roll legend Buddy Holly (played by Ruairi O’Connor), who died at the age of 22 in an airplane that crashed in Clear Lake, Iowa. Colin Hanks plays Norman Petty; Nelly plays Chuck Berry. Encanto will be released on November 24, 2021.

P.S. The Season 3 premiere of Doom Patrol will be released on Thursday, September 23, 2021 via HBO Max. See sneak peek below.