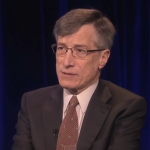 Stephen Sestanovich is the George F. Kennan senior fellow for Russian and Eurasian studies at the Council on Foreign Relations and the Kathryn and Shelby Cullom Davis professor of international diplomacy at Columbia University. He is the author of Maximalist: America in the World from Truman to Obama, just published by Knopf. From 1997 to 2001, he served as U.S. ambassador-at-large for the former Soviet Union. He has also served as vice president for Russian and Eurasian affairs at the Carnegie Endowment for International Peace, director of Soviet and East European studies at the Center for Strategic and International Studies, and senior director for policy development at the National Security Council. Ambassador Sestanovich received his BA from Cornell University and his PhD from Harvard University. He is coauthor or editor of several volumes on international affairs and has contributed articles to the National Interest, Foreign Affairs, New York Times, Washington Post, Wall Street Journal, Foreign Policy, American Interest, New Republic, Politico Magazine, and other publications.