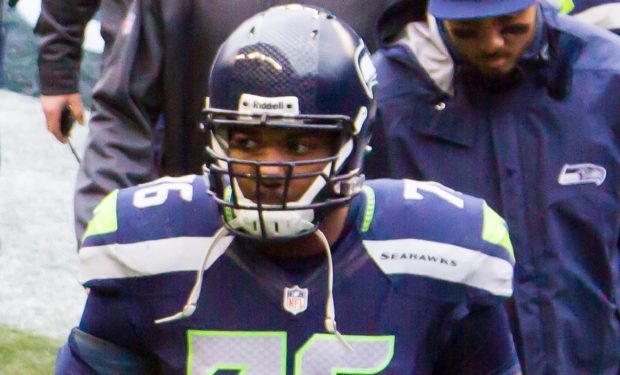 While the NFL season is on hold, NBCSN is airing NFL’s Greatest Games including 2015 Super Bowl XLIX, which saw QB Tom Brady and the New England Patriots beat Russell Wilson and the Seattle Seahawks, winners of the 2014 Super Bowl XLXIII (42-8 vs Denver Broncos).

Offensive tackle Russell Okung was in the starting lineup for Seattle. (He was drafted by the Seahawks with the sixth overall pick in the 2010 NFL Draft.)

[GIVE yourself or a FRIEND the GIFT of Amazon Prime!]

In March 2020, the 6’5”, 310 lb. offensive tackle was traded by the San Diego Chargers to the Carolina Panthers (in exchange for guard Trai Tuner) and went on a vacation with his gorgeous wife Samar Okung, mother of their baby boy Cairo, as seen in the stunning pink bikini pic above.