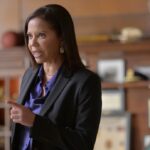 On the Season 11 finale of Blue Bloods (it’s a two-hour special), Danny (Donnie Wahlberg) discovers that his “new” nephew Joe Hill (Will Hochman) is working undercover for the ATF to bring down a gunrunning organization. All the Reagans band together to prevent Joe from being killed in the line of duty like his father when they fear Joe’s cover has been blown. The character of Special Agent Rachel Weber is portrayed by Gloria Reuben.

Gloria Reuben currently stars in the Showtime cop series City on a Hill with Kevin Bacon. She’s also well known for her roles on Mr. Robot (Krista Gordon), ER (Jeanie Boulet), The Agency (Lisa Fabrizzi), and in films including Steven Spielberg’s Lincoln as Elizabeth Keckley, among many others.