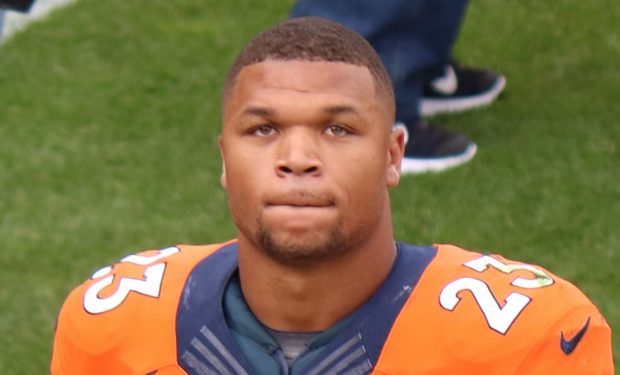 Devontae Booker is the 27-year-old NFL running back who played two years of college football at Utah before he was drafted by the Denver Broncos in the 2016 NFL Draft.

After four seasons with the Broncos – including his rookie year, when the Broncos won Super Bowl 50 — Booker signed with the Las Vegas Raiders in 2020.

When not on the field, Booker spends time with his 26-year-old wife and mother of two who goes by the name Desss Booker on Instagram.

When she posted the white bikini selfie above, she captioned it: “Cos’ this a big body Benz, please don’t crash. (gained some weight, I’ll be back soon).” Her husband replied with a series of red-hearted emojis.

P.S. ESPN is airing NFL’s Greatest Games on Monday nights at 8 pm. Tune in on May 18 to watch Booker and the Broncos play against the Kansas City Chiefs, quarterback Patrick Mahomes‘s first Monday Night Football game. [Watch on your phone with ESPN digital app. It’s free to download.]