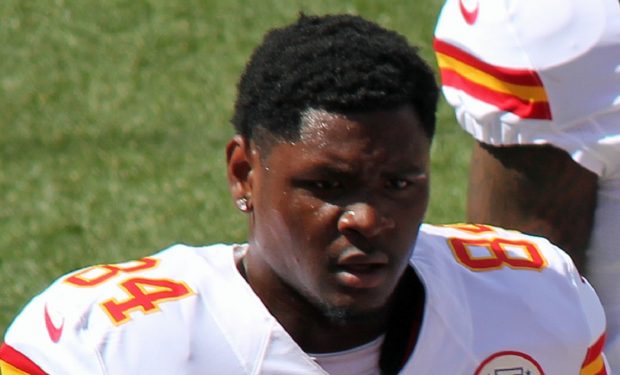 Demetrius Harris is the 6’7”, 230 lb. NFL tight end who didn’t play college football before he was signed by the Kansas City Chiefs as an undrafted free agent in 2013. (He played college basketball at the University of Wisconsin-Milwaukee, which does not have a football program.) In February 2020, he signed a one-year deal the Chicago Bears.

When not on the field, Demetrius spends time with his mother of his child (baby boy Trey Major Harris) who goes by the name Kip Force on Instagram.

The gorgeous former reality TV star (VH1’s Bye Felicia!, Real Chance of Love, where she was nicknamed “Blonde Baller”) often flaunts her awesome curves in string bikinis — as seen in the photos above and below.

In the mirrored photo below, the future Mrs. Showtime Harris reports that she receives many messages like “ur butt must be lumpy from the shots” and denies that she gets shots.

She explains that she chooses to “post my butt because it’s f*%king amazing” and other ladies who send her such messages shouldn’t be “downing someone for working out.”

In the 2014 clip above from Bye Felicia!, Kip flaunts her curves in a string bikini while getting a spray tan.

P.S. You can (re)watch Demetrius playing in the 2018 Kansas City Chiefs vs. Denver Broncos game on NFL’s Greatest Games on Monday, May 18 at 8 pm on ESPN.