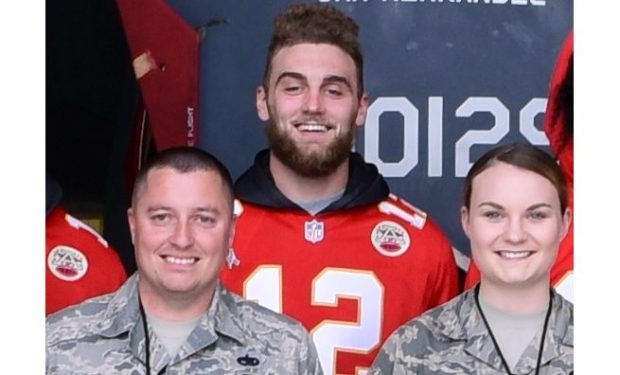 Gehrig Dieter is the 6’3”, 207-lb. wide receiver playing for the NFL’s Kansas City Chiefs. He played college football at three different schools (Alabama, Bowling Green and SMU) before signing with the Chiefs as an undrafted free agent in May 2017.

In August, Dieter suffered a back injury that put him on injured reserve pre-season, but now he’s back and the Chiefs released DT Braxton Hoyett from the practice squad to create a spot for Dieter.

When not on the field, Dieter spends time with his bride, his gorgeous wife of five whole months, Meg (nee Kraft) Dieter, who looks amazing in a bikini! When she posted the blue bikini pic below, Gehrig wrote: “Damn you thicker than a snickers.”

On October 5, the newlyweds announced that they’re expecting their first child in April 2020!

The Kansas City Chiefs travel to Denver to play the Broncos at Empower Field at Mile High on Thursday, October 17 at 8 pm on FOX.