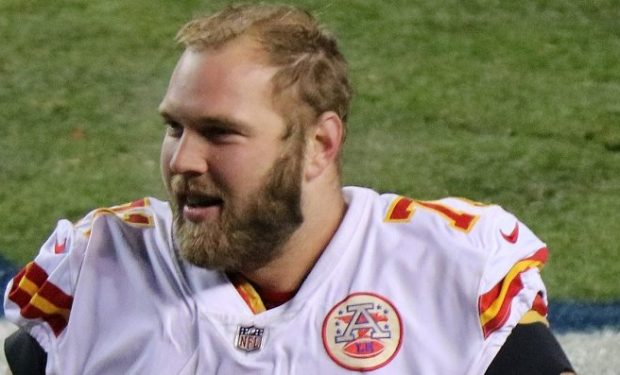 Mitchell Schwartz is the 6’5”, 320 lb. offensive tackle starting for the Kansas City Chiefs. After playing college football for UC Berkeley’s Golden Bears, he was drafted by the Cleveland Browns in the 2012 NFL draft. In 2016, Schwartz signed a five-year, $33 million contract with the Chiefs, making him one of the highest-paid right tackles in the NFL.

When not on the field, Schwartz spends time with his gorgeous wife Brooke Lynn Schwartz, who looks amazing in bikinis!

When she posted the bikini pic above (from Bora Bora), she admitted to being obsessed with the palm print and made a “full disclosure” about the top being ideal for leisure but not so much for high intensity swimming!

She wrote that the bottoms of the black-and-white bikini above was “a little cheeky.”

The Kansas City Chiefs travel to Denver to play the Broncos at Empower Field at Mile High on Thursday, October 17 at 8 pm on FOX.