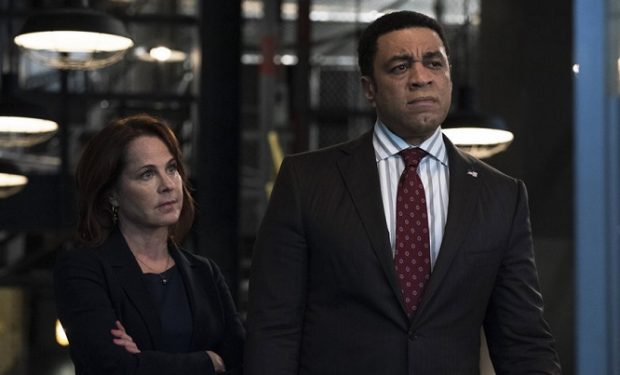 On The Blacklist episode “Bastien Moreau”, while Liz (Megan Boone) and the Task Force continue their search for The Corsican (Christopher Lambert), a Blacklister with ties to an international conspiracy, Cooper (Harry Lennix) puts his reputation on the line to appeal to the White House on Red’s (James Spader) behalf. By his side is U.S. Marshal and White House counsel Cynthia Panabaker.

[Watch Lovejoy on The Wire]

Cynthia Panabaker on The Blacklist is portrayed by actress Deirdre Lovejoy. She’s known for her roles on American Gothic (Detective Linda Cutter), Bones (Heather Taffet), and The Wire (Asst. State’s Attorney Rhonda Pearlman, see link above), among others. Lovejoy made her acting debut in the 1990 TV mini-series The Kennedys of Massachusetts as Rosemary Kennedy. The Blacklist airs Thursdays at 9 pm on NBC, right after Blindspot and right before Dateline. [Stream any NBC show watch LIVE on any device with NBC UNIVERSAL app available here. Download is FREE.]