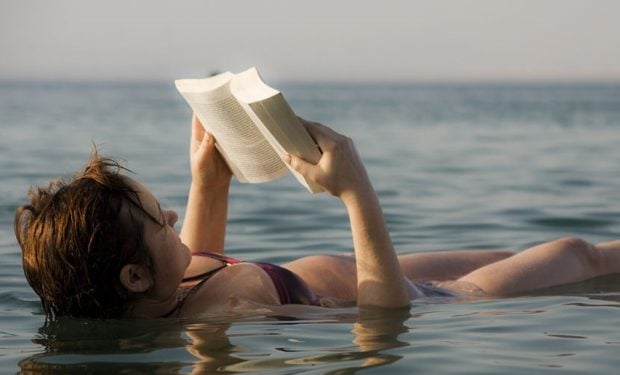 Young adult — or just young at heart? We all know the experiences of our formative years — when we were so-called young adults — stay with us forever. Even when they’re not front and center, those experiences are in our brains, shifting our gears. That’s why they’re called formative, after all. And that’s why adults love reading YA titles just as much as young adults do. The drama is the same as adult books, but the journeys of the characters usually involve a refreshing sort of purity or innocence — often innocence in its last days.

There’s something both beautiful and sad about growing up. Even the sunlight and starlight feel different when seen through the eyes of a YA protagonist. This summer you can forget all the beach reads about catty adults making their way in the working world — and surrender instead to teens and tweens finding out what the world contains in the first place. Give in. And go back. You’ll find parts of your younger self in all these titles. (The cover images below link to Amazon, where you’ll find more synopsis and blurbs from other authors and fans.)

Your Destination Is on the Left by Lauren Spieller

“Seventeen-year-old Dessa Rhodes is torn between leaving her modern nomadic life and pursuing her dreams of becoming an artist,” says the description. This book hits hard in presenting the urgency and seeming impossibility of making difficult choices. A brave and honest book about critical personal moments and individual fate. A book that brings to mind the classic Robert Frost poem, The Road Not Taken.

Who Are You, Trudy Herman? by B.E. Beck

Trudy Herman is taught to stand up for truth by her much-loved grandfather. Then in 1943, Trudy’s childhood drastically changes when her family is sent to a German-American Internment Camp in Texas. The title could be the title for almost all these books, as characters seek to discover their true selves. This is an unsparing, inspirational book.

“Claudia and Monday have always been inseparable—more sisters than friends,” says the description. Then Monday disappears. You will fall into this plot like it’s a vortex. Characters with character command the reader’s attention and sympathy.

The Leaving Year by Pam McGaffin

As the Summer of Love comes to an end, 15-year-old Ida Petrovich waits for a father who never comes home. Guess what? Ida makes the proverbial lemonade from lemons, and there is a sweetness but no saccharine. Engaging, brave.

Leah on the Offbeat by Becky Albertalli

Musician Leah is bisexual, but she doesn’t have the courage to tell her friends yet…Heartwarming, but earned.

Viola Li has to avoid light due to photosensitivity. But brightness finds a way. Hugely inventive, powerfully moving.

Sixteen-year-old Anna Dugan is a surfing star, but she doesn’t fit in, dude, with the surfer culture… A classic about finding one’s own way and maintaining a strong sense of self.

Heart of Iron by Ashley Poston

Seventeen-year-old Ana is found drifting through space with her friend, an Android. And then it gets strange! Even as you space out, you’re pulled in. Gravity, somehow, remains.

One twin must navigate the world alone after his brother is killed by police. A big, rich tale full of sadness, courage and understanding.

See All The Stars by Kit Frick

One of the most highly anticipated debuts of the summer. What exactly happened to Ellory? This story does not shy away from the difficult questions — it feels like life itself.

The Case For Jamie by Brittany Cavallero

The third book in the Charlotte Holmes series follows the death of August Moriarty. The whole series is recommended, but you don’t need to have read them all for this one to hit home. What a character, what an author!

The wonderfully named Jane Sinner gets kicked out of high school and moves out of her parents house with a community college plan. You know how plans go… Funny, touching, poignant.

Picture Us In the Light by Kelly Loy Gilbert

A book only masquerading as YA — this is a gripping, emotional tale full of intrigue and intelligence.

You want a plot? Drop off a girl in the middle of the woods and watch what happens. Triumphant tale of gaining understanding.

A character you will love and admire, but it’s too late. Or is that ever really the case? This book will leave you changed for all the experience it delivers.

I Have Lost My Way by Gayle Forman

A story of three who gain power and individuality as they learn to rely on their own courage — and generosity of spirit. Inspiring.

Girl Made of Stars by Ashley Herring Blake

Twins again, this time boy and girl, and an enormous test of trust after accusations fly. A serious examination of loyalty and bravery.

The Beauty That Remains by Ashley Woodfolk

Another tale of three friends, with music at its core. But is music enough to save them? Beautifully written exploration of character.