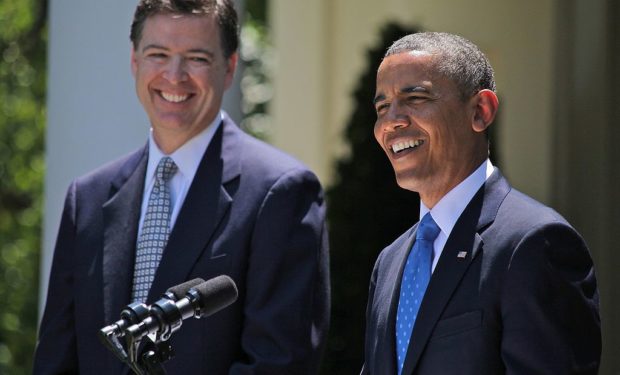 The last time a 6’8″ writer stirred up as much angst and controversy as James Comey is stirring was when Michael Crichton published Jurassic Park. Crichton’s famous and haunting tale about the return of the dinosaurs, published in 1990, sees yet another film in its money-printing franchise hitting theaters this summer — 38 years after it was published. Comey’s book, A Higher Loyalty: Truth, Lies, and Leadership, probably won’t have that kind of shelf life. But it sure is having its moment.

Forgetting longevity, Comey’s book and Crichton’s books have some things in common, besides their authors both seeing the world from on high. (Comey is 6’8″; Crichton might have even been 6’9″.) Both men — according to their own descriptions, not ours — consider monsters in their books. Crichton’s books are about monster viruses, monster prehistoric creatures, monster artificial intelligence, etc. Comey’s book is mostly about one “morally unfit” monster politician currently occupying the Oval Office.

Examining books by either Comey or Crichton, one gets the feeling that these two large men are both genre writers trying to expose similar dangers — and titillate. For instance, whose book is the following quote talking about?

“The (author’s name here) book depends to a certain extent on a little frisson of fear and suspense: that’s what kept you turning the pages.” The New York Times

Yup, it could be either one.