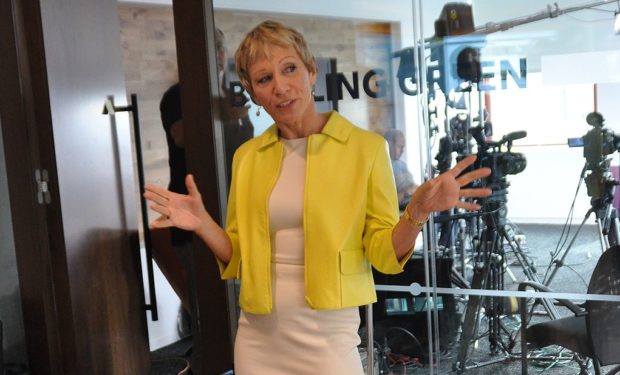 [Check out Barbara Corcoran’s memoir If You Don’t Have Big Breasts, Put Ribbons on Your Ponytails]

Barbara Corcoran’s husband is Captain William F. Higgins of the U.S. Navy. He played NAVY football with NFL Hall of Famer Roger Staubach and the 1963 team that went to the Cotton Bowl. (Staubach won the Heisman Trophy that year.) And Higgins later became an FBI special agent. After his service, Higgins ran a real estate company in Bergen County, New Jersey (that’s when he met Corcoran). They’ve been married for more than 25 years and have two children together, a son in his twenties and a daughter in her teens (family photos below). Corcoran talks about her husband from her Park Avenue apartment in the video below. When she walks into her bedroom she says, “Not a lot of action in this room.” And she proceeds to say that her husband Bill says she could write a book about “How to avoid having sex.” She admits it’s true. “I have about 500 reasons easily.” The best one involves a cold sore. (She talks about her love life around the 10:55 mark.)

[Related: Barbara Corcoran Is One of 10 Kids From Edgewater, New Jersey]

A typical dysfunctional family at play!

Huge thanks to my family for coming out in the rain to tape my profile for Shark Tank! If you haven’t seen it yet, head on over to my Facebook page. You’re gonna love it!