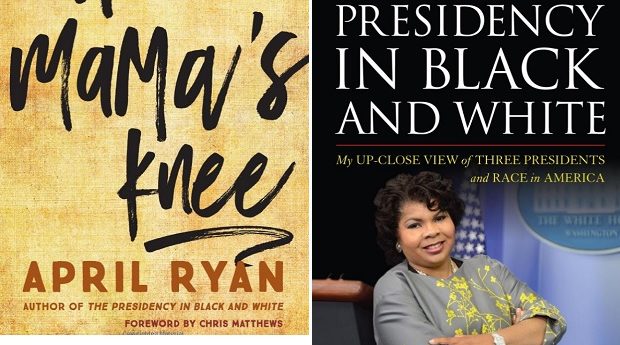 Veteran journalist April Ryan received a tongue-lashing from White House press secretary Sean Spicer, who evidently didn’t like Ryan’s reaction to his chit-chat. “Stop shaking your head again,” Spicer said to Ryan during a White House press briefing. He said “please” first — but that didn’t stop people from coming to Ryan’s defense. Ryan’s list of defenders included many powerful women, who saw sexist paternalism in Spicer’s treatment of her. One of those women was Hillary Clinton:

[LEFT: The Presidency in Black and White by April Ryan]

April Ryan has presumably earned the right to shake her head when she hears malarkey. The veteran radio correspondent has been inside the beltway and the White House for years, counting President Barack Obama, First Lady Michelle Obama, President George W. Bush, First Lady Laura Bush, President Bill Clinton, and Secretary of State Hillary Clinton among the many people she has interviewed one-on-one. The Morgan State alum has appeared on NBC’s Meet the Press, CBS’s Face the Nation and This Week with George Stephanopoulos on ABC. An African American, Ryan’s most recent book is At Mama’s Knee: Mothers and Race in Black and White.