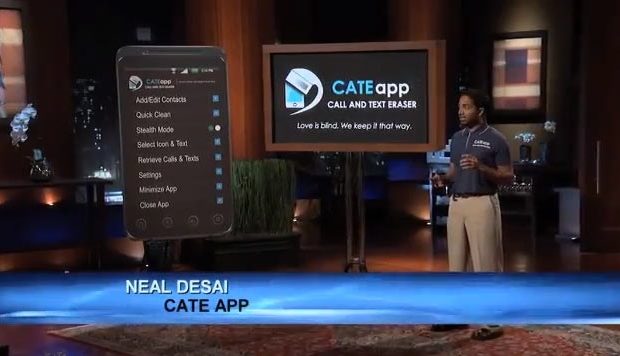 A bright-eyed 25-year-old man named Neal Desai pitched his business, CATE app, on Shark Tank in 2012. CATE is an app that hides messages from certain people on a user’s smartphone. If one of those contacts you want to keep private calls or texts, it gets hidden and stored. It’s an app ideal for a relationship cheater or an undercover cop, among others who want to keep some relationships on the down low. Desai said he bought the app from a police officer for $17,500 and developed a database of 10,000 customers. Desai also said if Tiger Woods had CATE app on his phone, he’d still be married.

Desai accepted a deal from Kevin O’Leary and Daymond John for $70,000 in exchange for 35 percent equity in the company. But four years later, there’s little trace of CATE app. The website is down and the app is no longer available. The CATE app twitter account‘s most recent post is from January 2013. However, there are plenty of “cheater apps” available today including mTracker and CheatMaster.