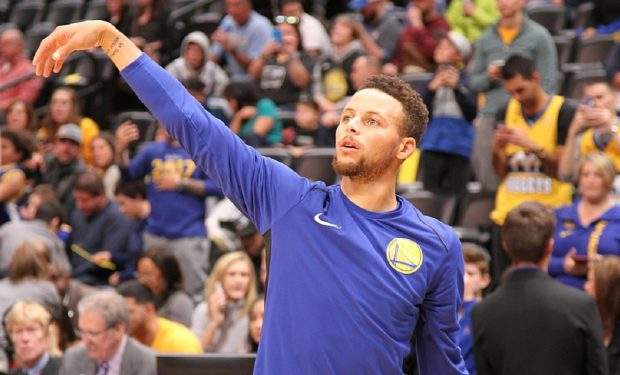 Golden State Warriors head coach Steve Kerr and 2x NBA MVP Steph Curry shared the podium at a White House press conference this week, celebrating their unique accomplishment in winning their 4th NBA championship together. The presidential residence remained white, but Kerr was probably a little surprised it didn’t have a bit of a blue and yellow tint — Curry was there, after all.

Thanking President Biden and Vice President Harris for the invitation, both men spoke about how honored they were to be there, with Curry saying how he hoped the Warriors’ journey to the title could be an inspiration to people throughout the country. He said the title represented working together toward a goal.

Steph Curry and Steve Kerr addressed the media ahead of the daily press briefing at the White House. Curry thanked President Joe Biden for bringing Brittney Griner home. He also said the team is very excited to be here. pic.twitter.com/p4HwcLNsdq

Just the night before, Kerr was at a postgame presser where he explained exactly how inspirational Curry has been.

“He’s the modern day MJ,” Kerr said of Curry, explaining that Curry’s effect at away games reminded him of his days playing with the Chicago Bulls and Michael Jordan. Kerr said that back then they’d go on the road and half the fans in the opposing arenas would be wearing red jerseys with number 23 on them.

Now, Kerr sees the same phenomenon when the Warriors travel, except that the jerseys today are blue and yellow — and the number on them is 30.

Curry “elicits an emotion from people because he’s so awe-inspiring with his play,” Kerr says. “He’s incredibly inspiring and as a result we get a ton of support on the road.”

The test to really measure the Jordan-Curry analogy will have to wait a while. According to Sportsnaut calculations, while Steph Curry’s jersey is currently the #1 selling NBA jersey, close behind is a red one with the number 23 on it. That’s right, twenty years after Michael Jordan retired, his jersey is #2 in sales, beating out contemporary superstars like Luka Doncic and LeBron James.

Will Curry’s jersey top sales lists in 2048? Kerr has already seen Curry do too many impossible things to doubt it.