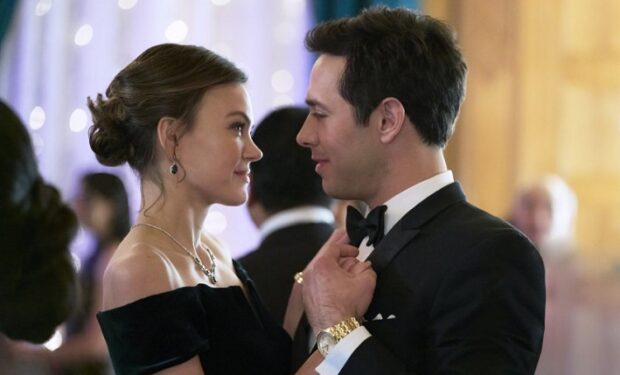 Teagarden and Rady in 'A New Year's Resolution' (Hallmark/Crown Media)

In the new Hallmark Channel movie A New Year’s Resolution, young, beautiful and successful morning show producer Kelly (Aimee Teagarden, Friday Night Lights) has gotten in the habit of saying no. She decides to make a change on New Year’s eve by making a resolution to say yes. Wouldn’t you know it, right after that, she meets a handsome man named Tom (Michael Rady, The Sisterhood of the Traveling Pants) who says yes to everything.

Like several Hallmark movie, A New Year’s Resolution was filmed in Canada. What’s unique about this one is that it was shot on 21 different locations to capture difference scenes including Kelly running an obstacle course and taking a polar plunge.

The Roaring Twenties flapper scene was filmed at the historic Fort Garry Hotel in Winnipeg, Manitoba.

A New Year’s Resolution airs on Hallmark Channel on Tuesday, January 12 at 8 pm.