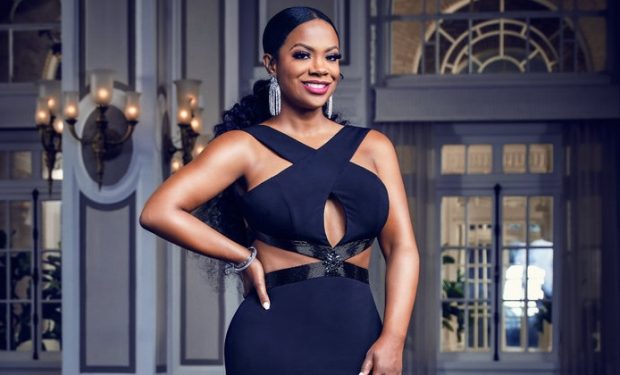 In The Real Housewives of Atlanta episode “Hot Tea with a Side of Cookies,” while Cynthia Bailey brings Tanya and Kenya Moore together to work out their differences after Toronto, Porsha Williams and Dennis go back to couples counseling. Meanwhile Todd Tucker finally makes good on his promise to spend more time with wife Kandi Burruss Tucker.

When not filming The Real Housewives of Atlanta, Kandi is often in front of a camera as seen at the Essence Black Women In Hollywood event, where she slayed without a bra in a loosely tied wrap dress by Retrofete that revealed a lot of cleavage and leg. (Shoes by Gianvito Rossi.)

At the event, Burruss says she “fan girled” when she met her Nafessa Williams (see photo below) who plays Burruss’s favorite superhero, Thunder from Black Lightning.

The Real Housewives of Atlanta airs Sundays at 8 pm on Bravo, right before Shahs of Sunset at 9 pm. [BRAVO on your phone with the BRAVO Digital App found here. Download is FREE.]