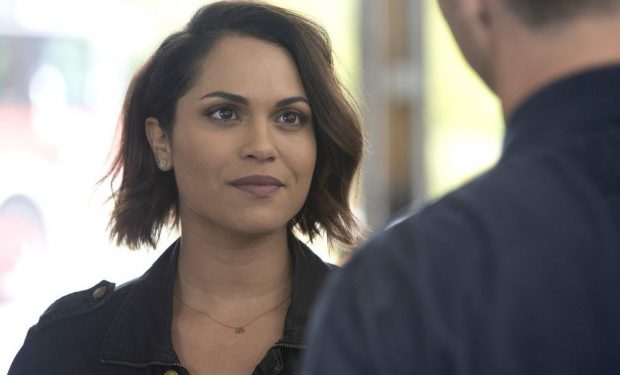 On the Chicago Fire episode “Bestfriend Magic,” paramedic Gabby Dawson (Monica Raymund) throws her ex-husband Matt Casey (Jesse Spencer) for a loop when she shows up at the Firehouse 51. Everyone is excited to see her and gathers around.

When Captain (Eamonn Walker) asks if she’s staying for lunch, she asks if Cruz (Joe Minoso) is cooking which has him fake laugh, “Ha ha ha, it’s like you never left.” Then Brett (Kara Killmer) breaks up the crowd and suggests that they give Dawson and Casey a minute to catch-up. Everyone clears away in an awkward moment of silence.

When alone with Casey, Dawson reveals that she’s in town for just two days. While looking Casey up and down, she says, “I’ll try to make it longer next time.” She’s in town for work, to “rub elbows with donors” at her aid organization’s fundraiser event. Will Casey go with her?

In real life, Raymund is in a relationship with cinematographer Tari Segal, who took amazing photos of Raymund as she was getting ready to go to her cousin’s wedding. Raymund wore a plunging neckline dress that revealed a long feather tattoo between her breasts.

Chicago Fire airs Wednesdays at 9 pm on NBC, right after Chicago Med at 8 pm, and right before Chicago P.D. at 10 pm. [BONUS: Stream any NBC show watch LIVE on any device with NBC UNIVERSAL app available here. Download is FREE.]