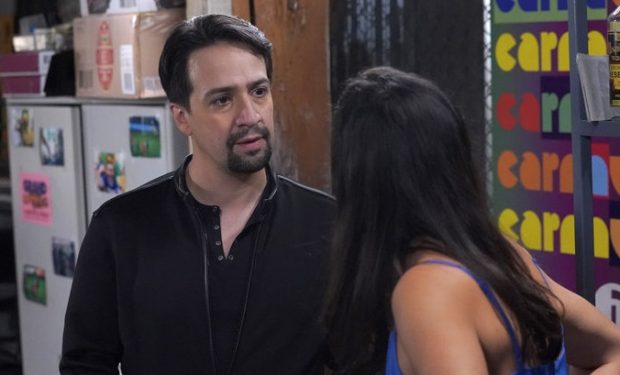 On the Brooklyn Nine-Nine episode “The Golden Child”, the title refers to Amy Santiago’s (Melissa Fumero) brother David who is portrayed by Broadway icon, Hamilton creator, Tony Award-winning, Emmy Award-winning, Oscar nominee Lin-Manuel Miranda. Over dinner with their mother Carmela (Bertila Damas), Amy’s husband Jake (Andy Samberg) shares all of Amy’s most recent achievements but nothing compares to David. Amy is livid when she hears that David, who’s also a cop, passed the lieutenant test. (Amy is a sergeant.) And the way he decided to take the test (as an altruistic gesture to his partner who was sick) drives Amy up the wall.

[Miranda played himself on Curb Your Enthusiasm]

Later, the two siblings have a dance-off and it ain’t pretty. Amy isn’t afraid to use her forearms and David uses too much elbow. See hilarious clip below. Brooklyn Nine-Nine airs Thursdays at 9 pm on NBC. [BONUS: Stream any NBC show watch LIVE on any device with NBC UNIVERSAL app available here. Download is FREE.]