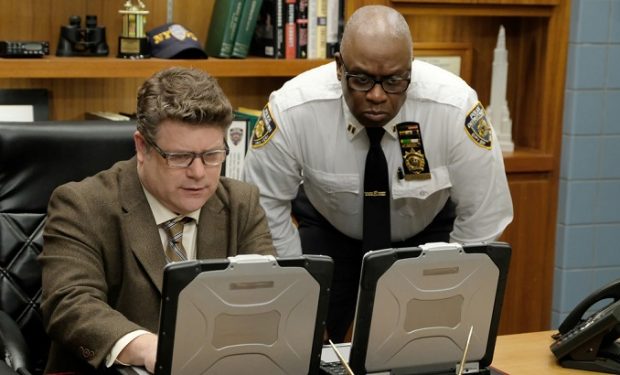 In the Brooklyn Nine-Nine episode “Ticking Clocks,” while NYPD Detectives Hitchcock (Dirk Blocker) and Scully (Joel McKinnon Miller) try to cook the perfect lasagna in the Nine-Nine’s community kitchen, Jake (Andy Samberg) and the rest of the squad try to track down a hacker who’s infiltrated the precinct’s servers. Captain Holt (Andre Braugher) calls in Sergeant Knox for IT help.

[Check out Astin with Josh Brolin in The Goonies]

Sgt. Knox is portrayed by actor Sean Astin. He’s best known for his roles in The Lord of the Rings films (Sam Gamgee), 50 First Dates (Drew Barrymore’s brother Doug), Rudy (Fighting Irish hopeful Rudy), and The Goonies (Mikey), among others. Astin, the son of actress Patty Duke and Addams Family star John Astin, is currently starring in the Netflix series No Good Nick with Melissa Joan Hart. Brooklyn Nine-Nine airs Thursdays at 9 pm on NBC, right after A.P Bio and right before Abby’s.

“Having dreams is what makes life tolerable.” #Repost @espn ・・・ On This Date: "Rudy" was released in 1993, when his dream of playing for Notre Dame finally came true.