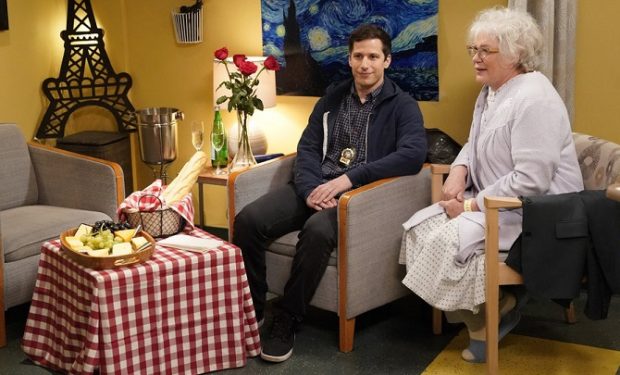 In the Brooklyn Nine-Nine episode “Casecation,” work is so busy for Jake (Andy Samberg) and Amy (Melissa Fumero) that they celebrate their anniversary while standing guard over a comatose patient in the hospital. At the hospital, Jake meets patient Pam who appears to be waiting for a Parisian-themed date.

[Check out Sweeney in It’s Pat]

Pam is portrayed by Julia Sweeney. Julia Sweeney is known for her various roles on Saturday Night Live from 1990 to 1994 including the androgynous fictional character Pat. Sweeney is also recognized for her roles in movies including It’s Pat (Pat), Stuart Little (the voice of Mrs. Keeper), Pulp Fiction (Raquel), Coneheads (Principal), and Gremlins 2 (Peggy), among others.