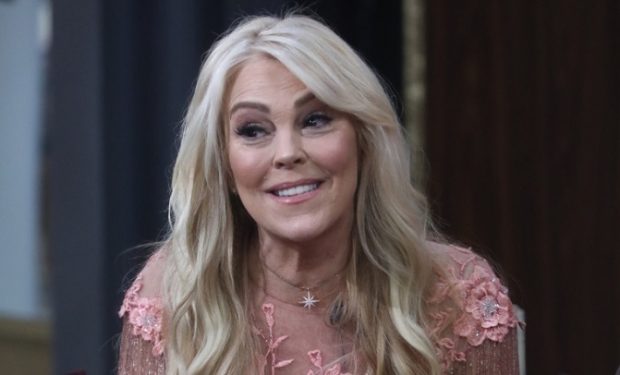 One of the most senior contestants on Season 2 of Big Brother: Celebrity Edition is Dina Lohan, 56-year-old momanger of former child star Lindsay Lohan who is now 32. This isn’t Dina’s first time on a reality TV show. She starred in Living Lohan on E! in 2008 when she was launching her daughter Ali’s music and acting career. And she and her ex-husband Michael Lohan, father of her four children, argued together on Family Therapy with Dr. Jenn.

On Big Brother: Celebrity Edition, Dina is reunited with with actor Jonathan Bennett who played Lindsay’s love interest in the 2004 movie Mean Girls. Lindsay recently had Bennett on her new reality TV show Lindsay Lohan’s Beach Club (see photo below). According Dina, all the girls in the original Mean Girls are into filming a sequel.

She explains, “I want there to be another one, but we have to wait ’til Tina [Fey] gets through with the Broadway show.” Mean Girls the Musical is currently at The August Wilson Theatre on Broadway until September 8, 2019. Big Brother: Celebrity Edition airs Mondays and Tuesdays at 8 pm on CBS. [Bonus: Watch MORE Celebrity Big Brother anytime through CBS ALL-ACCESS or Amazon Prime. Both options offer free trials.]