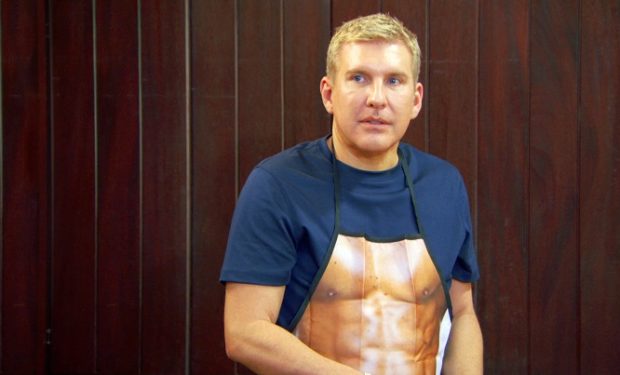 On the Season 6 episode of Chrisley Knows Best, “No Men for Old Country,” Todd Chrisley’s manhood gets called into question during a vacation with family and friends. While wearing an apron with a photo of six-pack abs, Todd feels forced to prove his manhood at the rustic lodge where they’re staying. Maybe Todd should stop referring it to as “our little weekend getaway” and put the paisley sweaters away — and stop worrying about the lint on his clothes?

[Todd wears a short sleeve hoodie like this one]

Even Todd’s wife Julie chimes in on the gender stereotypes and tells Todd, “I thought men were supposed to be able to light fires.” Todd’s son Chase doesn’t seem to know his way around a campfire either. Plus, he lets his little niece Chloe boss him around. See video below. Chrisley Knows Best airs Tuesdays at 10pm on USA.

Chase and Chloe are gettin’ into it on tomorrow’s all-new episode of #ChrisleyKnowsBest. Don’t miss it!