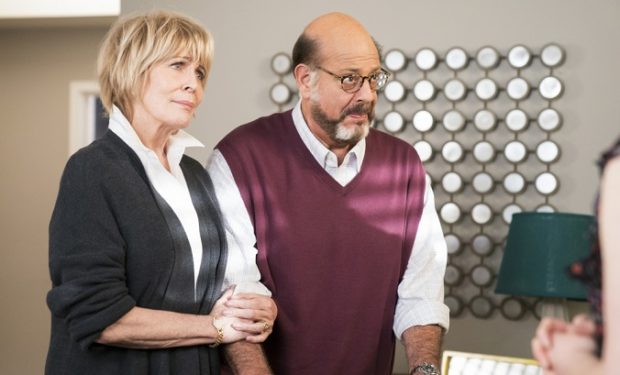 In the Life in Pieces episode “Parents Ancestry Coupon Chaperone,” while Colleen (Angelique Cabral) cashes in on all the love coupons Matt (Thomas Sadoski) has given her over the years, Tim (Dan Bakkedahl) and Heather (Betsy Brandt) chaperone Samantha’s (Holly J. Barrett) dance. At the dance, Heather bumps into an old boyfriend. But the real drama walks in the door when Jen’s parents Dave and Charlotte come to visit.

[Watch Melamed as Sy in A Serious Man]

Jen’s parents are portrayed by Fred Melamed and Joanna Cassidy. Melamed is known for his deep voice (Silk Stalkings) and roles in Woody Allen films (Hannah and Her Sisters with Dianne Wiest!, Radio Days, Crimes and Misdemeanors, Husbands and Wives), in the Coen Brothers’ A Serious Man (Sy Ableman), and Lake Bell’s In a World… (Sam), among others. Life in Pieces airs Thursdays at 9:30pm on CBS, right after Mom, and right before S.W.A.T.