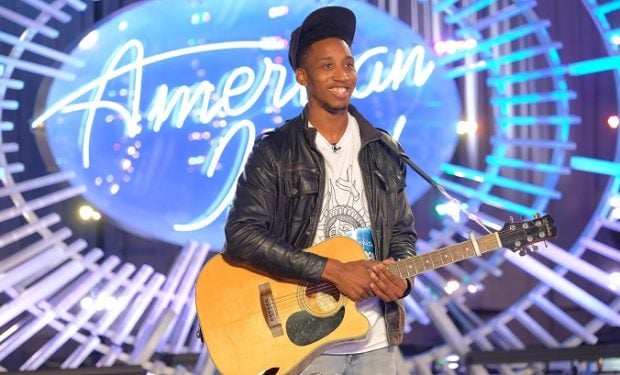 One of the great things about the TV talent show American Idol is the sheer talent it attracts — and how different each singer’s story is. In this regard, American Idol Season 16 is no exception. On the first night of auditions (March 11), the new panel of judges — 5x Grammy Award winner Lionel Richie, Katy Perry, and Luke Bryan — get to watch and listen to a variety of singers from around the world perform. And they get to hear their stories. One of the most memorable performances is delivered by 26-year-old Dennis Lorenzo from Philadelphia, Pennsylvania who plays an acoustic guitar with a hole in it. Dennis’s story also includes finding the love of his life, model/actress Clotilde Delavennat. She is the mother of Dennis’ younger daughter Aliyah (see cute photos below).

My love, my man, life may not be the easiest every day, but God knows how grateful I am to have you in my life! You are such an inspiration and I am so proud of everything you’re accomplishing!! ?????❤ @hllywdrenz . #Picture ? by @iambhre . . . . . . . . . . . . . . . . . . #Love #MixedCouples #InterracialRelationships #InterracialCouples #French #Blackandwhite #Talent #Talented #BlackMan #Redhead #Redheads #RedHair #IAmRightHere #Woman #Man #Hollywood #PowerCouple #InterracialFamily #LoveIsLove #ActorsLife #Singer #Actress #FrenchActress #brannan #Hot #OnFire #IGotYou #ILoveYou #youandme

Clotilde Delavennat is known for her roles in the films Soul Diaspora (Amber) and Vipercops (Daisy), among others. She most recently worked as a French dialect coach on the set of ABC’s How To Get Away with Murder with actress Lolita Davidovich, who plays Laurel’s mother Sandrine. See photo below. American Idol airs Sundays at 8pm on ABC.

A post shared by Clotilde Delavennat ? Actress (@clotildedelavennat) on Mar 9, 2018 at 8:48pm PST