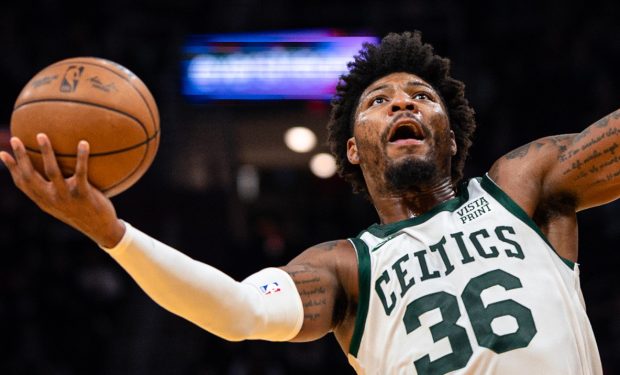 Wedding proposals are sometimes spontaneous but often they are planned. When NBA star Marcus Smart of the Boston Celtics proposed to his longtime girlfriend Maisa Hallum on Christmas Day, he got down on one knee. That was the most traditional part of the proposal.

As seen in the video above (swipe!), Smart and Hallum were wearing matching plaid onesies at home on Christmas Day when Smart directed Hallum to watch a video of Hollywood movie star Will Smith on their gigantic screen TV.

Smith is bundled up as he’s filming his message from Antarctica. The Oscar-winner goes on to tell Hallum that she won’t go “empty-handed” this Christmas. The video and the message leaves Hallum a bit confused until she turns around and sees Smart on one knee and with a big ring.

[Related: Watch Will Smith Get Hazed by High School Kids in West Philly]

Smart’s teammates including Blake Griffin and Jayson Tatum replied with words of congratulations as did celebrity Boston Celtics fans including Donnie Wahlberg (Blue Bloods, New Kids on the Block), among others.

Note: Will Smith is filming the upcoming Disney/NatGeo series Pole to Pole. It’s a documentary that “covers an expansive journey spanning different biomes, communities and landscapes across the Earth.”