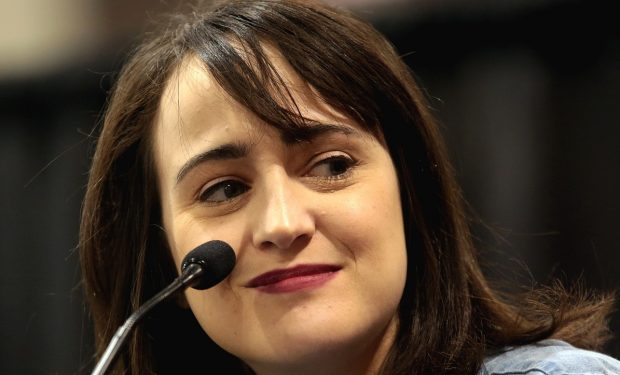 While Hollywood star Emma Thompson is promoting the Broadway musical Matilda on daytime talk shows, actress Mara Wilson (who played the little girl with special powers in the 1996 film with Danny DeVito and Rhea Perlman) is greeting fans at Comic Cons around the world. Matilda is based on the 1998 Roald Dahl book of the same title.

When Wilson (who also starred in Mrs. Doubtfire with the late great Robin Williams) shared the photos below taken at the Comic Con convention in Liverpool, UK, she thanked “all the mums and dads who helped their daughters dress as Matilda! As you can see in this photo, I was in tears over it. TOO CUTE!” Be sure to swipe, to see Wilson, now 35, with the larger-than-life Star Wars character Chewbacca.

Wilson recently reunited with her Mrs. Doubtfire co-stars, Matthew Lawrence and Lisa Jakub, at a ’90s convention in Connecticut, see below.

When not meeting fans in person, Wilson is either writing (Where Am I Now? True Stories of Girlhood and Accidental Fame) or narrating audiobooks for other writers including children book author Marianne Blum, see below.

Wilson writes: “Ever feel like you’re not as smart as everybody else? So does Marianne Blume.” Wilson adds about the book, “I wish it had been around when I was a kid.”