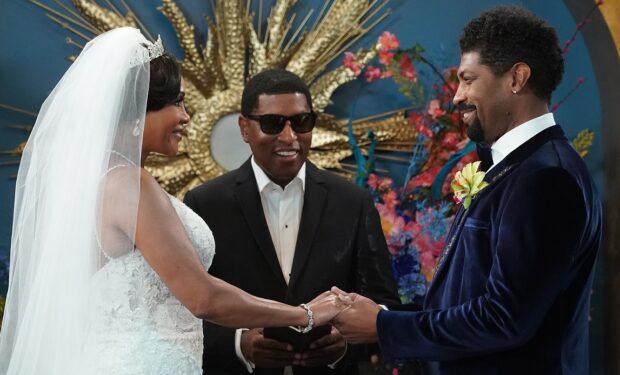 On the black-ish episode “My Work-Friend’s Wedding,” Charlie (Deon Cole) announces that he’s marrying Vivica A. Fox and asks his friend/colleague Dre (Anthony Anderson) to be his best man. The wedding is a stylish affair, with the King of R&B, Kenny “Babyface” Edmonds as the officiant.

When not on TV, in the studio or on stage, Babyface spends time with his family including his gorgeous and talented 13-year-old daughter Peyton Edmonds, who sings too!

Kenny wrote with the video above: “my daughter Peyton and I love us some Billie Eilish … and since we were asked to do a song together for a school event this past Saturday it only made sense, that she’d wanna do a @billieeilish song.” The father and daughter went in the studio and recorded “My Future.” Kenny recorded the video on his iPhone.

Below is a photo of Peyton with her mother, Nicole, taken in September 2021 at a NFL LA Rams game. And yes, Peyton is a professional model — see Guess campaign below.

black-ish airs Tuesdays at 9:30 pm on ABC, right before the celebrity game show To Tell the Truth which is hosted by Anthony Anderson.