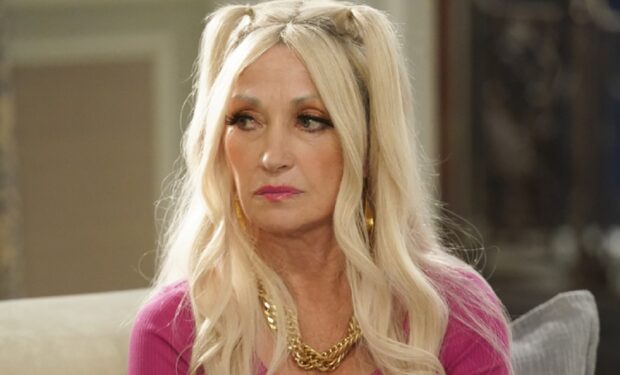 Jane Seymour as Bette on B Positive (Sonja Flemming/CBS)

On the B Positive episode “Bagels, Billiards and a Magic Show,” it’s Gina’s (Annaleigh Ashford) first day as the new owner of the retirement home Valley Hills. Right away, she turns to Drew (Thomas Middleditch) for help getting through to a short-tempered resident whose wife is sick.

Bette, the sexy blond (as seen above and in the sneak peek video below), is portrayed by 70-year-old British-American actress Jane Seymour (Dr. Quinn, Medicine Woman).

Get ready to see more of Jane: the former Bond girl (Solitaire in the 1973) James Bond film Live and Let Die, will appear next on the big screen in Ruby’s Choice, which is about a teen girl who’s forced to share her bedroom with her Grandmother (Jane Seymour) who has dementia, and “goes from hating her to loving her as she learns more about some family secrets.” Watch the moving trailer below.

Below is a video of Jane (as she usually looks!) getting ready to go on The Talk to talk about Bette!