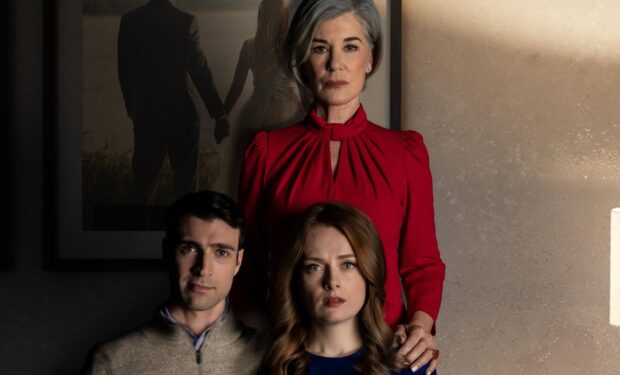 Smits (in red) in A Mother's Life (Lifetime photo)

The protagonist of the Lifetime movie ‘A Mother’s Lie’ is socialite Joyce. When she discovers that her teenage daughter Katherine (Alex Paxton-Beesley) is pregnant, Joyce forbids Katherine from telling her boyfriend about the pregnancy and then tells Katherine the baby died immediately after birth.

Twenty years later, Katherine is married and has a second daughter, Haley, who is in need of a bone marrow transplant. Grandmama Joyce tracks down Katherine’s first daughter, Libby (Madelyn Keys), who agrees to be Haley’s donor, although she doesn’t know they’re all related. As suggested by the title of the movie, Joyce’s big fat lie unravels and just might cost Haley her life.

Joyce is portrayed by Sonja Smits. The Canadian-born actress is known for her roles on TV series including Street Legal (Carrie Barr) and Odyssey 5 (Cynthia Hodge), and films including David Cronenberg’s 1983 horror science fiction movie Videodrome (Bianca) with James Woods and Debbie Harry, among others.

A Mother’s Lie premieres on Lifetime on Sunday, May 23 at 8 pm.