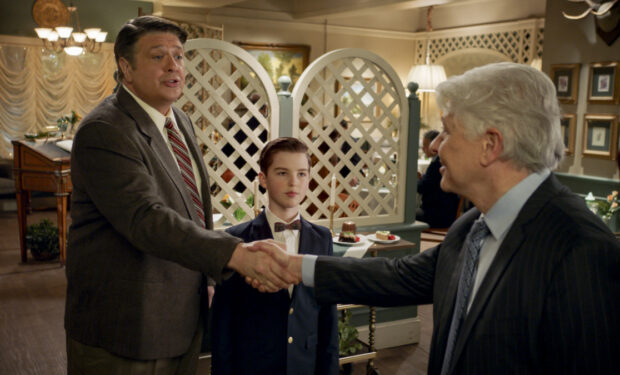 In the Young Sheldon episode ‘Crappy Frozen Ice Cream and an Organ Grinder’s Monkey,’ while Meemaw (Annie Potts) goes out to dinner with her boyfriend Dale (Craig T. Nelson), Sheldon (Iain Armitage) and George Sr. (Lance Barber) dine with President Hagemeyer (Wendie Malick) and a university benefactor. He’s name is Gary and he made all his money selling anti-static furniture for laboratories. “He’s not even a scientist,” says a disappointed Sheldon, “he’s a furniture salesman.”

Gary is portrayed by Dave Foley. The Canadian-born stand-up comedian and actor is best known for his TV roles on The Middle (Dr. Fulton), Dr. Ken (Pat), Hot in Cleveland (Bob), NewsRadio with the late great Phil Hartman (Dave), and The Kids in the Hall, among others. Or maybe you recognize his voice from A Bug’s Life (Flik the Ant).

Young Sheldon airs Thursdays at 8 pm on CBS, right before B Positive at 8:30 pm.