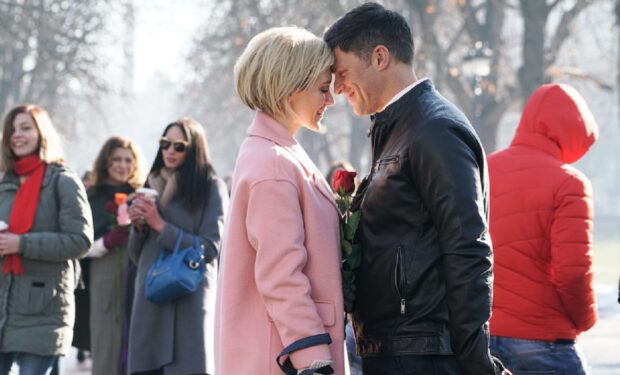 The protagonist of the Hallmark Channel movie Valentine’s Again (also known as Once Upon a Winter’s Date) is advertising executive Katherine (Nicky Whelan).

After experiencing the worst Valentine’s Day ever, on her way home after a terrible date, she literally bumps into a gypsy/fortune telling character (Marina Sirtis) who casts a spell on Katherine.

She tells Katherine that when she wakes up tomorrow, she’ll relive the day over and over until she finds her soulmate… whom she’s already met! Hint: Greg Vaughn plays florist Danny.

Valentine’s Again shows the skyline of Toronto and a glimpse of midtown Manhattan (those MTA buses are iconic) but according to imdb and Nicky’s Instagram account, the romantic movie was filmed in the capital of and the largest city in Bulgaria, Sofia. Sofia is located in the center of the Balkans, between the Black Sea and the Adriatic Sea.