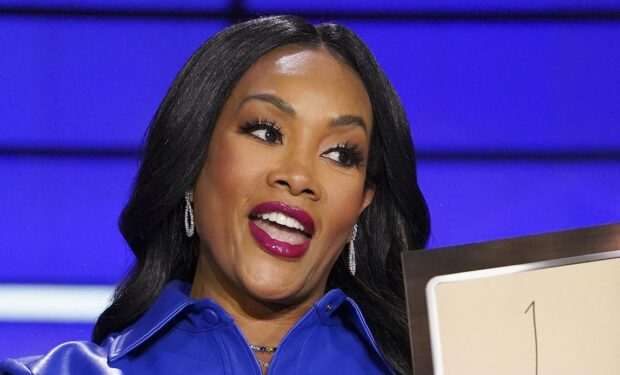 Vivica A. Fox on TO TELL THE TRUTH (ABC/Ron Batzdorff)

On this season of To Tell the Truth, host Anthony Anderson (black-ish) welcomes three new celebrities to the TV game show: America’s Funniest Home Videos host Alfonso Ribiero, funnyman Tom Lennon of 911 Reno fame, and Vivica A. Fox who is producing and starring in The Wrong… series of Lifetime movies.

Ms. Fox looks stunning as ever in a bright blue leather shirtdress and leaves the bottom two buttons undone which helps reveal a lot of leg when she sits down on set.

And those matching lace-up stilettos! Not many can pull-off the look but Vivica does with aplomb.

black-ish airs Tuesdays at 9 pm on ABC, right after the celebrity TV game show To Tell the Truth hosted by Anthony Anderson at 8 pm, and right before the black-ish spin-off series mixed-ish at 9:30 pm.